“You’re Afraid You’ll Fall in Love With Me” 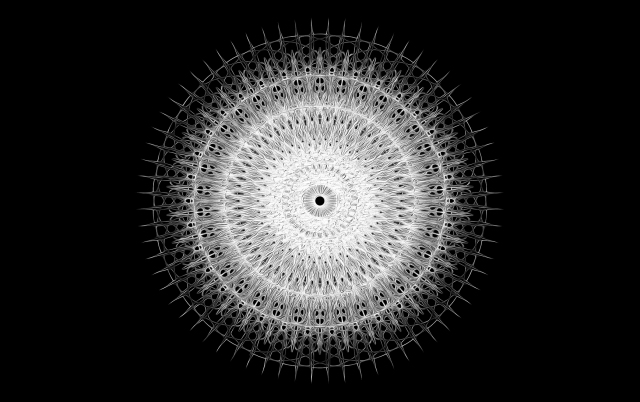 I entered the night star.
It was a long journey in the cold sky,
passing through all the Divine Glories,
like a diamond soaked with royal wine.

“An exquisite. That’s the word they used. Well, there are worse words, I suppose. I’ve certainly had worse hurled in my teeth. What of it? We come into this world the way we are; the world makes of us what it will. None of it is anything we asked for, it’s what we have, and what we must deal with, make the best of. This is true of the non-exquisites as well, although it seems that few of them – or fewer of them at least – can see this.” Harvey Morton, Brooklyn, New York, December 1947. 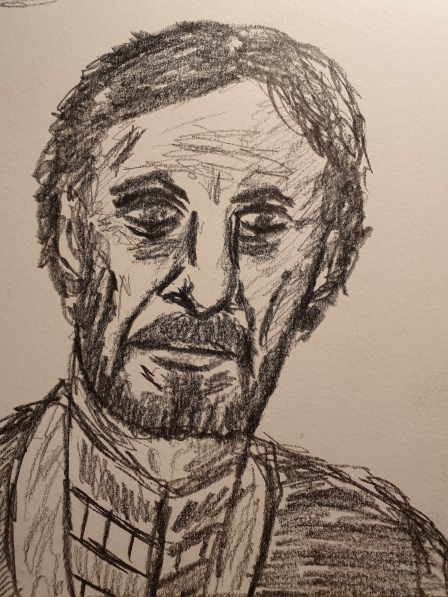 “You came to me in diffusions of green
and milky streaks of blue,
until nothing was newer, stranger
or more familiar than you.”

American poet Rodrigo Morton (1928-1999). Best known for his break-through 1972 volume, Idiot on the Holy Mountain. The poem above was taken from his later, quieter collection, Honey in the Rain.

The birth of an unjustified hope in Trenton, New Jersey

“Jennifer Atkinson, first date with her second husband three years after their divorce. ‘I feel so stupidly happy and giddy with hope tonight! What if it all works out somehow? What if this is how a new life takes hold and fills itself with meaning at last? Oh, I know I’ve had too much champagne. But pour me another glass. And another and another, so the night will never end!’ But it did end. And the new life did not arrive, alas. Trenton, New Jersey, September 1978.” Pencil sketch.

Portrait of Lorelei Lansmann on the occasion of her 47th birthday 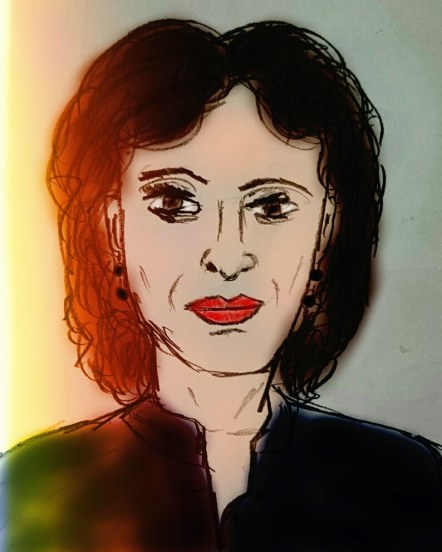 “Red pillow where the head of Christ has lain”

Red pillow where the head of Christ has lain
swallowed up by blue green gold flora
in the wash of the sea
Red pillow where Christ dreamed
someone was sleeping beside him
nestled warm against his back
Sea creatures, coral, seaweed surround it
drifting in a warm soup of left-behind water
warmed by the sun in a hollow of sand
Red pillow where Christ rested
head pointed toward the sea
weaving the sound of the waves through his dreams
Troubled dreams, full of breakage
sweatdrops on the pillow
unbodied, feeling somebody close to him
Red pillow sinking
as the sand drinks the water
the creatures scurry, some of them die
Christ dreaming of otherness
his head on the pillow, the red pillow
now alone on the seabed stripped by the tide

“The Poison Vapor and the Path to Grace”

“People have a lot of funny ideas about Satan, and most of them come from fairy tales or folk tales or cartoons or what have you. But let me tell what Satan really is. Satan is not a big red monster with horns and a tail; no, beloved, Satan is a vapor, a cold, clammy vapor that penetrates every corner of your heart and your mind. He seeps in slowly, like a fog, a poison fog, and little by little he fills every crack and crevice, he clouds up every vein and artery, he winds around every nerve, he creeps in and infects every thought, every impulse, every dream, every desire. That’s why you can’t fight him with your mind, your reason – he infects your reason, the vapor is already there, down in the very foundation and cellarage of your mind, of your thoughts.

“Something must come from the outside. And that something is grace. Grace doesn’t fight, grace doesn’t do battle, grace doesn’t rage and make war; grace … cleanses, like the autumn wind. Grace heals. Grace is a light that dispels the vapor, it comes like the sun in the morning to burn away the fog and spread life-giving warmth across the earth. Little by little, it starts to heal and cleanse the infected quadrants of your soul; little by little, your thoughts become clearer, your feelings become sharper, more directed.

And beloved, I’m here today to tell you what was imparted to me: this grace is there for everyone to have. It’s not some kind of mystical thing, some miracle reserved only for the elect. It’s … Oh, I don’t know how to tell you, I don’t know how to put into words what was given to me without words. But beloved, it’s a natural thing, it’s everywhere, it’s lying in the grass at our feet, and all we have to do is reach down and scoop it up. It’s a … a natural process, you see, like the planting and tending and harvesting of crops. And what it does is not transfigure you into something else, but rather, it gives you back your own self. It gives you back your own mind, your own feelings, your own soul, as murky and imperfect as that is. It sets you free – not to be become an angel or a saint or some sort of perfect creature, but to become nothing more and nothing less than a human being.

“And when it’s there, when that grace comes, beloved, you’ll know it. You’ll know the difference between making an ordinary, awful, stupid, hurtful, human mistake, and acting out of the … the infected impulses of that evil vapor. Why, it’s like trying to run with a fifty-pound ball chained to your leg. When they take that chain off, you still might not be able to run very fast – you still might be slow or lazy or old – but, by God, you’ll know the difference. It’s like that.

“How do you get it, how do you find and plant and tend and harvest this grace? Beloved, you’ve got to emulate Jesus. Emulate Jesus. Do you understand? Belief is a knotty thing, I know. There are many stumbling blocks, and some of them, I confess it, are beyond my ken to resolve. But you don’t have to resolve them. You don’t even have to believe in every jot and tittle of the Holy Scripture – although I do, beloved, I most potently and powerfully do. But what matters most is not that you believe on Jesus but that you emulate him. Who are you going to emulate, if you don’t emulate Jesus? Who are you going to emulate, if you don’t emulate the Lord? He was humble, he wept, he was in no way proud, he turned away from earthly power, he gave away his worldly riches, he committed his heart, his work and his life to the poor, the oppressed, the despised and the rejected. Whoever he was, whatever he was, let us follow that path, and be like him.”

(Fragment from an unfinished fiction)

“Lois Kaminsky (1936-2017). Originally a leading Freudian psychoanalyst, she ‘turned apostate’ and later became a noted philosopher of science. Although her groundbreaking work on conceptual spaces in the processes of cognition is considered her most important contribution, leading to new paths of research in neuroscience, she is probably best known for her controversial 1978 bestseller, ‘The Freudian Vagina: A Mythos of Misogyny.'” Pencil sketch.