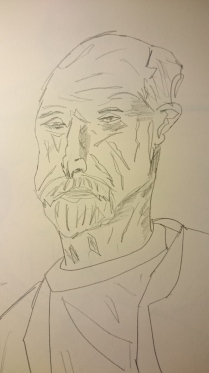 Your mother is dead and your past is gone. These childhood memories are just self-indulgence.

No, you’re wrong there. The memory of how she took my hand that day, the feel of her stiff, starchy shirt, the ironing board smell of it, the sound of her voice, soothing me: that’s more real — not only to me, but in the very fabric of the universe — than your blubbery carcass sitting right in front of me. It’s funny you think you’re such a powerful man, so full of grim, savvy wisdom, a figure of great affect, mighty presence — when actually you’re not even real. You’re a husk, a meat puppet set in motion by jerky electrical impulses in your brainpans. You don’t even know why you do what you do. You don’t know why you think what you think. Your soul is dead. The animating unifying principle that binds you into the life of the living universe is dead.

Is that so? Well, I can, with great affect, pick up this phone and have you bodily thrown out of the building. I can — with just a modicum of presence, no need for a display of might at all — then call another number and you’ll be arrested by the end of the day, on charges that I, in my grim, savvy wisdom, will determine with my good friend the police chief.

That won’t make any difference. You’ll still be dead. Suddenly he shifted. He no longer looked at Garland pityingly, but with a sharp smile. Why don’t you call your friend the police chief? And perhaps I’ll call a friend of my own. We’ll see who has better friends.

Garland laughed. So you’re the same as me, are you? Fancy yourself a player too? Another soulless meat puppet working the angles.

No. But we all must live in this Diamond Hell where hideous projections of unreality hold sway. It has nothing to do with the ironing board smell and the soothing voice, but it must be dealt with. The only difference is that I also live in that genuine reality and you don’t. You’re trapped here, eating your own entrails like an automatic idiot.

But you can still “call a guy,” can you?

No one has to call anyone. You said you could call the chief of police. I said I could call someone else.

Someone bigger than the chief of police.

You know what I’ve just realized? You’re crazy. I mean it, you’re out of your head. I’m sitting here talking to a crazy man, trying to make sense of what he’s saying.

Well, I agree that would be hard to do. Especially for someone imprisoned in the jerky electrics of his skull meat. Did you know there is actually no light in the brain? You see these studies of neuronal reactions and what not, read of how certain regions of the brain “light up” with neurochemical activity during this or that action or emotion. But this is just a figure of speech. Nothing lights up because there is no light in there. It’s a dark damp cave. That’s where you are. That’s the only place where you are. So no, I don’t doubt that you can’t follow what I’m saying.

Garland leaned back in his chair. This is tedious. I’m going to have you thrown out now. Don’t come here again, don’t ask me for money. It’s too late; I’m not buying anymore. I’ll get what I want without paying you a dime.

Oh, I didn’t come here for money. I came to tell you I’m withdrawing the offer. I’m going to keep that strip of land. But we got to talking about the past instead.

If I can have you arrested, you think I can’t get that land whether you’ve withdrawn your offer or not? It was just easier to buy it. But if I have to take a couple of extra steps to get it, so what?

So what indeed? He got up. He had a bemused look on his face. You don’t have to throw me out. I’m going.

Going off to call that guy?

Who said it was a guy?

Maybe I will make that call to the chief. Have you put away. I’m sick of the very thought of you walking around out there somewhere.

I don’t think you will.

Because I’m the only person in the whole universe who knows you and still pities you. And pity like that is like love. That makes me the only door you’ve got to walk out of hell. You won’t take it because your soul is dead. But who knows? Maybe there’ll be some quantum fluctuation someday that will put one quark of your soul back into your husk and you’ll be able to rush to the door before the quark decays and you’re dead again. Not everything can happen but maybe that can.

He went out. Garland closed his eyes. For some reason he saw a long sand beach with no footprints on it. He thought about the phone but the thought made him tired. He was suddenly very tired.